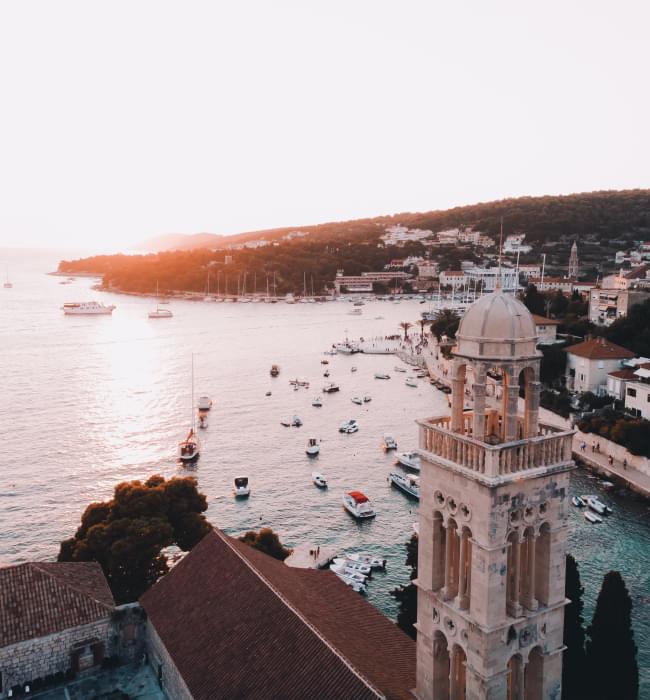 Maslinica is the only settlement on the island of Šolta's western coast. Its many exquisitely wind-shielded coves and inlets, and its mini-archipelago of seven isles, make Maslinica an extraordinary nautical, diving, and underwater fishing destination. Its most visited cove is the Šešula cove, due to its excellent position and protection it provides.
Continue Reading

Zlarin is the 3 rd largest, and one of the six inhabited islands of the Šibenik archipelago. Its lowest population is under 300 in the winter, rising above 2000 during the summer. In the past, it was the first tourist destination in Croatia to have its own written brochure, due to its developed coral diving and production businesses, as early as the 13 th century. The main reason to visit the heavily forested and largely uninhabited island today, is its nautical, diving and fishing potential; the flora and fauna as much in pristine state underwater, as on the island itself.
Continue Reading

Skradin is a city with a history 6000 years long, owing to its unique location in the central Adriatic, at mouth of Krka river. Since the time of the ancient Liburnians, the Greeks and Romans, and the Croatian princes of old, Skradin area was vital to the road and maritime routes passing through here from all four directions. It would take up several tomes to describe all the places of historic significance in the Skradin area, them being constructed on top of each others' remains through 6000 years of civilization. The nearby Krka waterfalls, today a Croatian National Park, are all the more reason not to miss out on Skradin. Today's Skradin Marina continues to serve sailors, in a tradition that goes back, even beyond the time of the origins of the city itself.
Continue Reading

Tribunj is a town 15 km away from Šibenik, known as Jurjevgrad from the 13 th - 15 th century. It is one of the most tightly compressed towns on the coast, owing the layout of its houses to the Turkish invasion times, when the people of the wider area all crowded on the inside of the city walls for protection. Growing olive trees and processing the fruits, as well as fishing, have been the two prevalent occupations of the people of Tribunj, with tourism, especially nautical, being developed rapidly in present times. The new marina has nearly 300 berths, well shielded from the winds; and the Tribunj area is rich with gorgeous beaches and authentic Mediterranean atmosphere, making it an unmissable anchorage on anyone's journey across the Adriatic.
Continue Reading

The Primošten area was inhabited as early as the 7 th century, with numerous emigration crises through history, due to its important strategic location. It is first mentioned under its current name in 1564, by which time it was already a fortified settlement on a small island. After the Turkish threat was over, the hard working people of Primošten have labored to develop their town, and it has seen only prospering since that time and today, all the while preserving its natural and cultural heritage. The Kremik marina of today, with over 400 berths in one of the safest places to anchor in the Adriatic, continues the centuries old tradition of Primošten as an important destination; today not so much economic or military, as a beautifull tourism one.
Continue Reading

Trogir is a city-museum in the true sense. In all of Central Europe it is considered as the best preserved Romanesque-Gothic city. The castle and the tower, surrounded by stone walls, contain the old core of Trogir. The most significant cultural monument is the Trogir cathedral. Its western gate Portal, built by master Radovan, stands for the most monumental piece of Romanesque - Gothic sculpture in Croatia. Trogir thrills its visitors with its many cultural-historic monuments and narrow alleys, and its many art collections with numerous masterpieces. The city of Trogir is situated upon the coast of the Kaštelanski bay, on an island connected to Čiovo and the mainland by stone bridges. ACI marina Trogir is located on the north side of Čiovo, between the Trogir bridge and cape Čubrijan, opposite to the city of Trogir. The Trogir riviera is marked by rich Mediterranean vegetation, olive orchards as vineyards, numerous islands and inlets, gravelly and sandy beaches. Well indented, pristine coastline is very favorable to sailors.
Continue Reading

Veli Drvenik is an island in the Split riviera, only 6,2 nautical miles off the coast of Trogir. With a surface of 12 km2 and shore length of 23 km, it is highly indented and therefore very suitable as a nautical destination. All underwater activities around Drvenik are strictly forbidden. Uvala Krknjaši is a cove on the east side of the island, well protected from the winds, especially west and northwestern ones. It is an excellent anchorage, and a small resort in the cove offers accommodation and domestic specialties. Kayaking trips are organized around the island as well, its mild weather conditions and shallow water, coupled with pristine natural beauty being irresistible for adventurous visitors.
Continue Reading